When news of the end of the World War reached Brunswick on November 11, 1918, people poured into the streets in a spontaneous outbreak of joy. But the good mood was turned upside down when young Rose Bouchard was accidentally shot and killed during the celebration. 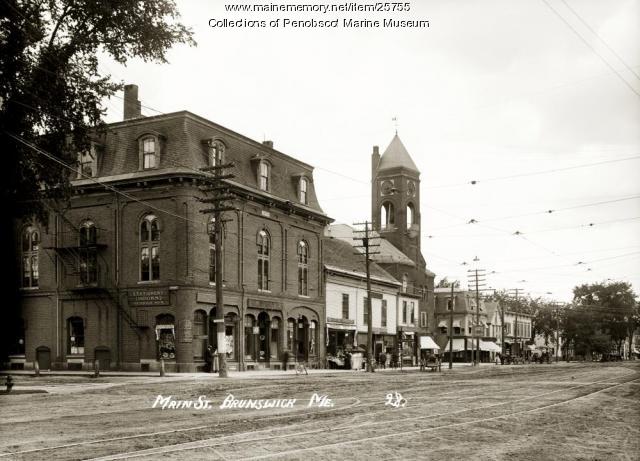 According to the accounts in the Brunswick Record and Lewiston’s Messager, 18 year-old Rose was killed at 7:30 am, on the corner of Pleasant and Maine Streets, right in the center of town. People had been in the streets since 3:45 am, a little before the signing of the Armistice at 11am Paris time.  Adding to the general cheering and merriment, some townspeople brought police rattlers and other noisemakers to the celebration. According to the Record, several boys went a step further, bringing loaded shotguns downtown. One, Frank Butler, fired his gun into the air from the Pleasant Street crosswalk, not far from where Rose and her friends were standing. Another boy, 15 year-old Hoyt Hoffman, went to do the same.

In his excitement, he pulled the trigger before the gun was fully upright, and sent a shell straight through Rose Bouchard’s chest. The shot was fired so close to Rose that, according to the Record, “the charge entered her breast without spreading, making a frightful hole.”

Rose’s body was rushed to a nearby doctor’s office, but she was declared dead on arrival.

Rose’s tragic death must have sent shock waves through the community. She was a member of St John the Baptist Catholic Church, a violin student, and a member of the Cercle Cremazie, a Franco-American dramatic society. She had been active in the war effort, as a member of the local Red Cross chapter, and working to sell war bonds. She had been employed in the weaving room of the Cabot Mill, as well as a stenographer or secretary for local insurance agent and undertaker, Wilfred Demers. In a sad irony, her lifeless body was taken to Demers’ funeral parlor after her death.

While the death was accidental, it was an accident waiting to happen. Hoffman is quoted in the Messager as saying that he “asked the shopkeeper for blank cartridges,” but it emerged that he had earlier fired the weapon through the window of a bowling alley. And he was far from the only “insane enthusiast” with a loaded gun, according to the Record:

During the morning shot guns were numerous in the hands of celebrators and it developed during the inquiries of the day that all were using loaded shells…[Assistant County Attorney Clement F.] Robinson said that in Portland some had used pistols with ball cartridges as a means of venting their feeling. Fortunately, the guns were fired into space.

At the very end of the worst war the world had yet seen, the people of Brunswick suffered another tragedy, close to home.  Rose Bouchard may have been an indirect casualty of the First World War, but her death is a reminder that not all casualties occur on the battlefield.