In March 1942, an army company arrived in Old Town, Maine. Like countless other companies across the country, the unit was assigned to guard critical infrastructure during World War 2. In Old Town, the soldiers were tasked with protecting the railroad from possible sabotage. This would have been unremarkable, apart from one detail – the soldiers were Black. The US Army would be segregated until 1948, and these soldiers from the 366th infantry regiment were all African American. They would be stationed in a town that was overwhelmingly White. Though they were initially welcomed by locals, it wasn’t long before the soldiers were demonized and chased out. 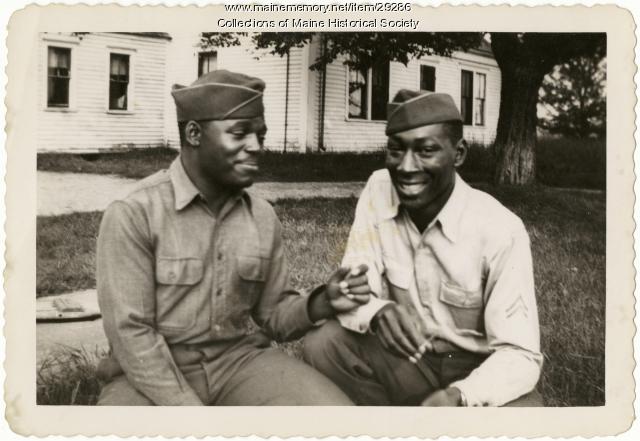 The Penobscot Times announced the arrival of the “Negroes” on March 20, 1942. Sports editor Otis Labree noted that that “We here in Old Town seldom see a Negro, and to look at these boys now is quite an oddity.” But LaBree also suggested the locals “make them feel at home here in the Canoe City.” He cited the example of Joe Louis, a Black boxer who was famous for volunteering to serve in the US Army in 1941.

In the weeks that followed, the paper also contained hints of good relations between the army men and the locals. The soldiers took part in an entertainment put on by locals, and started a softball team.

But the newspaper was also at the center of the backlash against the Black soldiers. Its chief editor published a series of inflammatory editorials which stirred up racial divisions, blew the resulting confrontations out of context, and finally led a campaign to petition the federal government to have the unit reassigned elsewhere.

In 1942, the Penobscot Times was owned and edited by John “Jimmy” Coghill. He had grown up in Viriginia, which was still dominated by Jim Crow laws and rigid segregation in social places. It’s hard to know for certain, but it seems likely that he brought this experience with him to his campaign against the men of the 366th regiment.

In the May 29th issue of the Times, Coghill issued a stern warning to the people of Old Town. Playing on racist stereotypes, he claimed that the Black soldiers would generally make themselves a nuisance, and in particular that they were a threat to the young women of the town. He alleged not only that familiarity between white women and Black men would lead to marriage, but also that some soldiers were “entertaining” married women in the town while their husbands were away. Coghill called for a town curfew on “unattended women.”

In the very next issue of the weekly paper, June 5, Coghill reported an incident they seemed to prove his prediction correct. On the evening of June 1, Henry LeGasse and his wife, along with another married woman, were said to have been walking back from a dance when they were allegedly confronted by two of the African American soldiers. According to Coghill’s account, the soldiers demanded LeGasse “share” the women with them and when LeGasse, a boxer, refused, a fight broke out, during which time one of the soldiers slashed LeGasse with a knife or razor.

In Coghill’s mind, this was exactly what he has been warning about – the mixing of the two races would only lead to violence. In fact, the account of the incident raises questions. Coghill himself had spread the idea of the sexually aggressive Black man just days earlier, and likely bears at least some responsibility for what happened.

Not that Coghill was repentant. A local minister, Reverend Raymond Baughan of Orono, challenged the editor on his rhetoric – “This war is being fought, we are given to understand, over the worth of persons of every race and creed…would your editorial have been written, and in the same language, if the soldiers living in Old Town had been White?”  Coghill’s response to the reverend cited the “barriers of nature” between the races, and questioned if the minister would be comfortable with his own children marrying “a Negro.”

The memory of the fight and its aftermath lived on long after the army company had left Old Town. In 1946, Coghill was running for Congress (calling himself a “Progressive  Democrat”) and the incident was rehashed. Even years later, the former editor was only slightly apologetic. In a May 17 letter to the Times, he maintained (falsely) that he and his newspaper had simply been reacting to events, rather than stirring them up:

This writer shut his eyes and ears to complaints for twelve weeks. Finally, when the situation could not longer be ignored by the local newspaper, the editorial now being circulated was written….All in all, it was a vicious editorial. It was meant to be. It was dashed off after a particularly odious attack on a  man strolling down the street with his mother and mother-in law.

Coghill expressed regret for “lashing out with every charge prejudiced Southerners have ever brought against the Negro,” and claimed that his views had changed since then. But by saying that his editorial came after the scuffle with LeGasse, rather than before it, he was still trying to shift the blame onto the Black soldiers.

Alongside the story of the fight in the June 5, 1942 issue of the paper, Coghill printed a copy of a petition calling for the removal of the entire company. The request was addressed to US Senator Owen Brewster, asking the War Department to reassign them. Brewster had his own checkered history with race relations. His candidacy for Governor in 1924 was supported by Maine’s chapter of the Ku Klux Klan. In his 1932 campaign for Congress, Brewster tried to have the result overturned on the basis that the state’s literacy test wasn’t being properly enforced against French-speaking voters in Northern Maine.

However sympathetic or otherwise Brewster was to the petitioners, he passed the request along, and the soldiers of the 366th were indeed removed from Old Town later that month.

The Old Town incident was hardly unique. In many towns across the US, Black soldiers found themselves made unwelcome by local residents, often due to racial prejudices. Despite the fact that these men were defending the country in a time of war, White Americans’ unfounded fears overrode their patriotism.

The National Archives has the records of many of these incidents, but the folder for Old Town is now empty.

That’s not the only difficulty I had in researching the story. Brewster’s papers are housed at Bowdoin college’s special collections – but the staff there found no reference to the Old Town petition there either. The Penobscot Times has been digitized and is available online – but several issues in May and June 1942 aren’t available. The newspaper’s microfilm at the University of Maine’s Folger library also lacks those issues. The only record of Coghill’s original inflammatory editorial I found was when it was summarized in the Times in 1992, on the fiftieth anniversary of the incident. The then-editor rightly called it “the most disgraceful episode in the history of the paper.”

The historical record never survives perfectly, and even in big institutions, items sometimes go missing. But it’s hard not to conclude that at least some of these gaps in the record are the result of trying to erase the memory. But we can’t heal old wounds by pretending they didn’t exist, and we can’t address systematic racism without acknowledging the truth.