In the 1830s, Augusta was a boom town. Designated the state capital in 1827, the settlement had grown quickly from a frontier trading post. Several large public buildings were completed in the space of a few years, including the state house (1829), the state armory (1827). The largest of these was the Kennebec Dam, which was begun in 1837. At the time it was the largest Dam project in the country. It cost three hundred thousand of dollars to build and involved moving more than 400,000 cubic feet of stone and two million board feet of lumber.

A project as large as this required substantial labor to complete, and among the workers on the Kennebec Dam were some of Augusta’s first French Canadian immigrants. We’re fortunate to have a vivid description of life for these early migrants through the journal of Nathaniel Hawthorne. 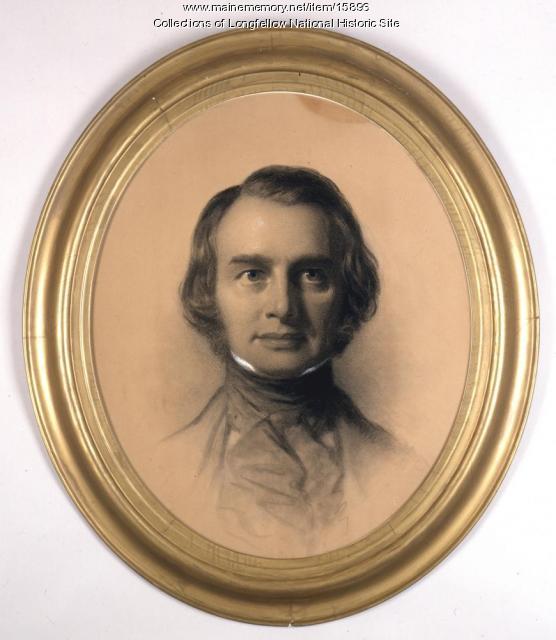 When he visited the city in 1837, Hawthorne was not yet a celebrated American author. In fact, Hawthorne was in Augusta to visit a college classmate, Horatio Bridge, who had helped get Hawthorne’s first book published the year before. Hawthorne was visiting Bridge to thank him for the assistance.

Horatio Bridge was a member of one of Augusta’s leading families. In addition to working as a lawyer, he was a partner investor in the Kennebec Dam company. Bridge’s large house at which Hawthorne was staying, overlooked the river and the dam project:

“The house is very pleasantly situated,–half a mile distant from where the town begins to be thickly settled, and on a swell of land, with the road running at a distance of fifty yards, and a grassy tract and a gravel-walk between. Beyond the road rolls the Kennebec, here two or three hundred yards wide. Putting my head out of the window, I can see it flowing steadily along straightway between wooded banks; but arriving nearly opposite the house, there is a large and level sand island in the middle of the stream; and just below the island the current is further interrupted by the works of the mill-dam, which is perhaps half finished, yet still in so rude a state that it looks as much like the ruins of a dam destroyed by the spring freshets as like the foundations of a dam yet to be. Irishmen and Canadians toil at work on it, and the echoes of their hammering and of the voices come across the river and up to this window.”

In addition to the “mansion,” the Bridge family also owned large swaths of land in Augusta, including the hill adjacent to the new dam project which was then known as Cushnoc Heights  but which came to be called Sand Hill. As French Canadian and Irish laborers came to Augusta to work on the dam, many of them built houses on the Bridge family land on Sand Hill.

Detail from an 1838 map of Augusta. The Dam is visible, as is the Bridge mansion, surrounded by empty lots designated for mill housing on Sand Hill. Image: Digital Maine.

Hawthorne accompanied Bridge on a walk through this neighborhood during his visit. Bridge was effectively the landlord and employer for these families, and while he was apparently “considerably a favorite with the lower orders,” his authority over them was near absolute. Hawthorne reports that his friend was sought after by the French Canadians as a mediator because Bridge spoke French. But he also records that Bridge had the unspoken right to “[tear] down the dwelling-houses of a score of families, and driving the inmates forth without a shelter,” if he so wanted. Such was the precarious position the migrant workers found themselves in.

Likewise, their living conditions were crude. Hawthorne described a trip to the collection of “shanties” occupied by the workers. The migrants were living in turf houses; simple constructions with dirt walls and roofs. These buildings were cheap and quick to construct “They may be built in three or four days, and are valued at four or five dollars”), and would become common for newcomers to the American and Canadian West.

In these simple dwellings, Hawthorne observed that “upwards of twenty people” sometimes lodged in homes no bigger than twenty square feet.

This was an indication that the newcomers were not just limited to male laborers, but whole families. Hawthorne describes both French and Irish families, including women and children. Yet the French Canadians were also highly mobile. He notes that many families “are frugal, and often go back to Canada with considerable sums of money.” At one point, two French Canadian boys came to the house to sell strawberries. As in later periods, this early migration was a family affair, and everyone pitched in to the family economy.

Like many of his contemporaries, Hawthorne indulged in prejudices against both the French Canadians and the Irish immigrants. He claimed, for example, that it was customary for Irish husbands and wives to settle their differences “with blows.” He also seems quick to believe that the immigrants are drunk, lazy, or generally “immoral.”

On the other hand, Hawthorne notices the difficulties faced by the newcomers. He describes fights between the two French and Irish (a theme common to all accounts of the two groups across time and space). He also records an incident in which a French Canadian and a local Yankee got into a fight over oxen. The French Canadian was fined $12; there’s no mention of a punishment for the Yankee.

At heart, Hawthorne was a romantic, and even with his critical observations, its clear that he admired some of the simplicity of the migrants’ life. After a visit to an “elegant new mansion” in Hallowell, which had cost upwards of $60,000 to build, the author mused:

“Which sort of house excites the most contemptuous feelings in the beholder,–such a house as Mr. —-‘s, all circumstances considered, or the board-built and turf-buttressed hovels of these wild Irish, scattered about as if they had sprung up like mushrooms, in the dells and gorges, and along the banks of the river? Mushrooms, by the way, spring up where the roots of an old tree are hidden under the ground.”

Not only were those mushroom-like houses building on the old roots of French settlement in the Kennebec Valley during the colonial period, they were also laying the foundations of a Franco community in Augusta that would endure to the present day.