On August 4 1890, an overflow crowd packed Biddeford’s Opera House for a political speech. Community leaders from several parts of the state had come to pay their respects to the speaker and hear his ideas. The speaker that night was not a Maine politician, nor a federal official from Washington, but Honoré Mercier, the Premier of Québec, and his audience was largely made up of Franco-Americans. 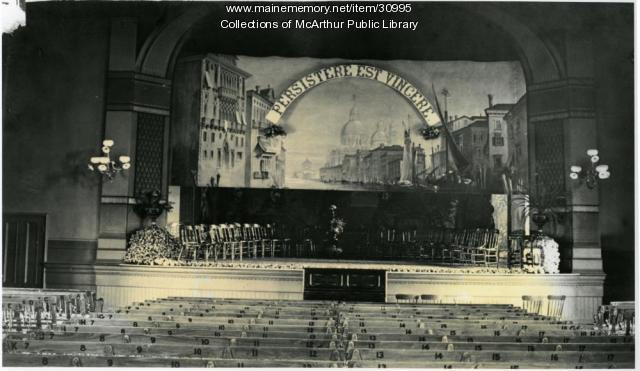 The Premier had been asked to speak in Biddeford by Daniel Côté, a prominent member of the local Franco community, and one of Biddeford’s representatives in the state legislature. Mercier and his family were staying at nearby Old Orchard Beach, their first stop on a trip that was part vacation, part politics.

By 1890, Old Orchard had already established itself as a vacation resort, and had become popular with Québécois, especially upper-class residents of Montréal. A correspondent for L’Electeur, a Quebec City newspaper, described the appeal in a pair of reports on August 15 and 21, 1890:

“Perhaps like me, driven by a misplaced sense of patriotism, you have only previously had occasion to dive into the icy waters of the Gulf [of St Lawrence]. But in doing so, you haven’t known anything like the experience at Old Orchard…Those who have, once, put their foot on the long and silky shore at Old Orchard, always come back, or talk about coming back.”

The journey to Old Orchard Beach, some 280 miles from Montreal, was made possible by the construction of the Grand Trunk Railway’s connection to Portland in 1859, and to downtown OOB from 1873. The Électeur correspondent, writing under the pen-name of “O Varech,” (Varech is a French word for kelp) described the train journey as a hot day’s worth of stifling hot temperatures, followed by the sweet relief of the breeze brought by the White Mountains of New Hampshire and the trip into Maine. 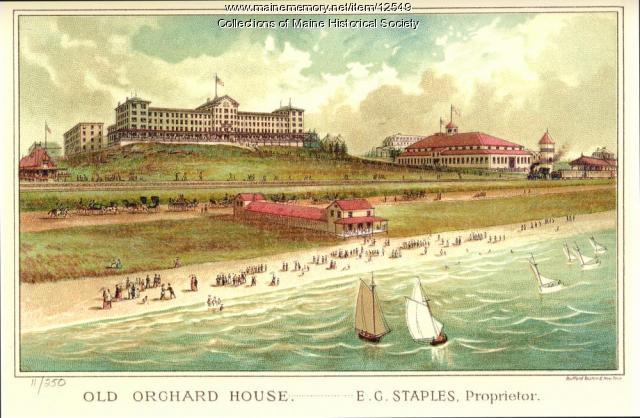 Due to the Beach’s widespread appeal, Premier Mercier was not the only distinguished Canadian guest there that summer. Old Orchard House, perhaps the most famous of the town’s hotels, paid host to Speaker of the Canadian House of Commons, Aldric Ouimet, Mayor James McShane of Montreal, several judges, members of the clergy, and other representatives of high society. According to Varech, about a quarter of the residents at the Old Orchard House that summer were French Canadians. Perhaps with some partisanship, Varech declared that the French Canadians were the envy of other guests, with their beautiful women and tasteful outfits (which he contrasted to the “screaming” clothes of the Americans). What’s more, at least according to Varech, the Americans delighted in hobnobbing with the Canadian elite:

“The Yankees claim not to be attracted to titles whatsoever, yet in my observation, there’s nothing they want more, without wanting to let it show.”

Mercier himself was treated like a celebrity as well. His speech appears to have been barely noticed by the local English-language journalists. The Portland Daily Press ran a short notice that botched the Premier’s name, calling him “L.A Mercier.” Nonetheless, reports in French Canadian papers claimed that the audience included Yankees as well as Francos from Biddeford and elsewhere.

Mercier’s speech focused on education, which was a cornerstone of his policy agenda in Quebec. He had come to the premiership in 1887 as the head of the Parti National, a coalition of Mercier’s own Liberal Party with a small number of Conservative assembly members supporting them. Mercier’s nationalist platform had won him popularity in the aftermath of Louis Riel’s arrest and execution by the federal government in 1885. Mercier’s government’s accomplishments included holding the first inter-provincial convention to curb the power of Canada’s federal government. Mercier’s views on education reflected his cross-party appeal. He advocated the expansion of publicly funded education, but within the existing Church-run system of schools.

L’Electeur reprinted a portion of Mercier’s speech in its August 11 issue:

He spoke of education as a means of welfare and well-being for the working classes. He reminded parents that they must never neglect the schools in favor of the factories. He also made an allusion to the liberalism of the citizens of our province towards the Protestant minority, and expressed a wish that the American nationality take a step in the same direction towards our émigré countrymen, whose faith forbids them from attending the public schools.

He also gave a elegy to the Canadienne woman who devotes herself to teaching. He posited that in principle education should be Christian before anything else, if one wants to make good citizens. He said that he would be like to know how many of the impious have ever spilled their blood on the field of battle. “To be a good patriot you must love your country.” He said. “And to love your country well, you must have religious principles.”

Mercier was an explicit supporter of Catholicism and the church. As Premier, he had pushed for the restoration of rights to the Jesuit Order, who had been expelled from Canada after the British Conquest in 1760. The day before his Biddeford speech, Mercier had attended Sunday Mass locally, and he was accompanied onstage by clergy from the local parishes.

His intertwined view of education and religion would have been familiar to Franco-Americans in the audience. Most Franco communities in Maine included parish schools in which most of the Franco children were educated. This parallel education system allowed Franco Americans to maintain their native language, but also their Catholic faith. Some parents, as Mercier noted, even saw public schools as an instrument of the Protestant establishment.

Outreach to Franco-Americans was also very much part of Mercier’s nationalist agenda. His government had sent official representatives to the 17th convention of Franco-Americans at Nashua New Hampshire in 1888. He supported efforts to entice Franco Americans to return to Quebec, but also saw a need to support international efforts to promote unity among people of French extraction, and would seek the support of governments in France for his goals.

The speech was apparently well received. L’Electeur said that it was met with a standing ovation and three separate rounds of applause. According to Varech, the Premier was a hit at the Old Orchard Hotel as well:

The passage of Mr Mercier has left an impression which still lasts. The conversations of which he is the subject are like an echo of his visit. Not only has he stunned the Americans with his bold and practical ideas concerning primary education, in his speech at Biddeford, but he has still taken the heart of young America after having captured the intelligence of their fathers.

In the wake of his speech, the Premier spent a couple of days “sampling the delights of Old Orchard Beach,” which included a visit to Portland, a trip around the islands and a fishing excursion. According to Varech, “the day passed in the most agreeable way.” Mercier may also have attended the costumed balls, witnessed the evening fireworks or bathed in the sea like the other beach-goers. 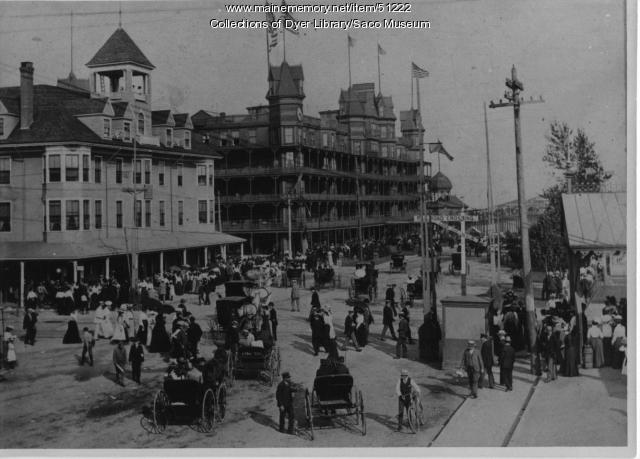 This summer idyll was not to last. Unbeknownst to the crowds at the beach that summer, Mercier’s premiership was in its final months. Despite having won an electoral victory in June 1890, he would be ousted by December 1891. Mercier’s politics had made him many enemies, especially among Anglo-Canadians, the federal government and members of the Conservative Party. Accused of embezzling public funds in September 1891, Mercier was dismissed as Premier in December by the Lieutenant-Governor of Quebec. Although he was later exonerated, his career as an elected official was effectively over.

Instead, Mercier would turn his attention to the cause of wider Franco-American cooperation. In this capacity he visited dozens of Franco-American cities across New England, and would return to Maine in the summer of 1893.