In 1886, the school board of the city of Augusta noted that as more French Canadians were coming to the city, they were increasingly bringing their families with them, or starting families in their new homeland. As a result, the committee recommended that these young “French scholars” be educated in the city’s public school system. According to the committee, very few of the city’s 100 school-age (7-15 years old) Franco-Americans were actually enrolled in school, despite the state’s compulsory education laws. This was not an uncommon situation, for a variety of reasons. Most Franco-Americans came from farming families, where children were expected to work from a young age. As a result, literacy rates in rural Quebec, even among adults, were relatively low in the 19th century. It’s also likely that Franco-American parents were not inclined to send their children to “English” schools outside their communities. The concept of secular public education would have been alien to most of them, since schools in Quebec were directed by either protestant or Catholic churches (Quebec did not establish a secular education system until 1964). For many early immigrant families, therefore, the local public school probably seemed like an English, protestant school – and no place to send their children.

To remedy this situation, Augusta’s school committee concluded that

The only practicable way to deal with this class, seems to be by the establishment of an ungraded school expressly for them, where they can be taught until fitted to enter some class in the grammar school.

That same year, the school committee invited the 33 year-old Miss. “Marion” (Marie-Anne) Cyr from Aroostook County to teach in the newly-established school, which became known as the Laurel Hill School. Cyr must have seemed a perfect fit for the new school.  She was a graduate of the recently-established Madawaska Training School (the forerunner to the University of Maine at Fort Kent), an institution specifically designed to train local Acadian teachers in Aroostook County to teach English and an Americanizing curriculum to Acadian students. Who better to teach French-Canadian students in Augusta?  The new schoolhouse was built at the north end of State Street, near the Franco-American neighborhood of Sand Hill, on land leased from the Edwards Manufacturing Company (where most of the students’ parents were employed), at a cost of nearly $2,000 (roughly $65,000 in today’s money).

The new school, dubbed the Laurel Hill Primary School, opened in the fall of 1887 to French-Canadian students with no prior formal schooling. It was almost immediately overwhelmed with demand. Although the committee boasted that the new schoolhouse was “one of the pleasantest school rooms in the city,” the one-room building was only designed to accommodate sixty pupils. Enrollment began at 208 and rose to 380 by the year’s end. (It seems that the school committee grossly underestimated the size of the Franco-American population in the city. In their 1886 report, the school committee estimated that there were just 100 Franco-American children between the ages of 7 and 15 in the city). While there may have been two, or even three, classes using the schoolhouse in turn, the building was clearly overcrowded. “It is evident that another school for their accommodation will be necessary in the fall,” declared the school committee at the end of the 1886-7 year, and they recommended the second story of the schoolhouse be finished to accommodate a second class.

Teaching at Laurel Hill was “wholly in English,” despite the fact that the teacher, Miss. Cyr, was almost certainly bilingual. The Augusta school committee saw this as a distinct advantage, and indeed, a driving mission of the school:

In no way can we so fully benefit this large and increasing element in our population as by giving them an opportunity to acquire a good English education.

The committee’s report for 1887 also notes that “having no previous knowledge of the appearance of the printed words of any language, [these children] will learn to read English as readily as American children—indeed, apparently more readily.”

The school committee also set its sights beyond the younger Franco-American population, and in February of 1887 held a meeting to gauge the interest in an evening school for adults (those aged 15 and older). Roughly 100 individuals (two-thirds of whom were “French”) signaled their interest, and the new evening classes began before the Christmas vacation of 1888-9. The city grammar school was fitted with electric lights for the first time to allow classes to be held after dark, and the endeavor was considered “very successful.” In later years, the evening school would have to compete with both evening shifts at the Edwards mills and “evening entertainments” among the community, but classes persisted for several years.

Both the evening and Laurel Hill schools suffered from lack of regular attendance, either from truancy or sickness. In the fall of 1886, an outbreak of measles kept many students home, and just a year before, the city physician had vaccinated 247 Franco-American children against smallpox at the city’s expense. In its first year, the second eight-week session of the evening school was abandoned after just four weeks because so many students were sick with influenza. Franco-Americans were particularly likely to be victims of disease because their living conditions were so unhealthy. The city’s board of health repeatedly warned that the lack of a citywide sewer system and the overcrowding in the Edwards Company tenements was causing the spread of disease among the city’s Franco-Americans.

With the establishment of the Laurel Hill School, the school committee felt empowered to enforce the state truancy laws against the Franco-American population for the first time, and a new truant officer was appointed in 1886 for that purpose. The committee’s primary target was the Edwards Manufacturing Company, where the majority of truant children were employed as child laborers. In 1887, the committee estimated that there were 200 Franco-American children of school age (7-15 years old) in the city, and more than 100 of them were at work in the mills. Manufacturers actively recruited children as workers, because they could pay them less, and parents often tolerated or even encouraged the practice so as to bring more money into the family economy. While the school committee reported the Edwards Company to the Kennebec County Attorney, most large employers in this period suffered few repercussions for their use of child labor. 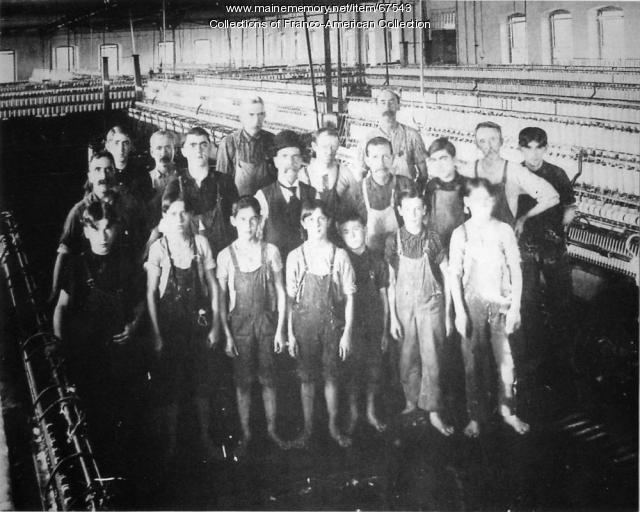 The second public school for Franco-Americans in Augusta was opened in 1890; it was initially housed in the basement of St Augustine’s Church – the new parish for the city’s Franco-Americans, and a Miss Martel was employed as the teacher. Although the parish allowed them the use of the church basement at no charge, the public school was shortly moved to an empty schoolhouse on Kendall Street. This, however, was to be the beginning of the end of the experiment in public education for Augusta’s Franco-Americans.  With the completion of the new parish, its pastor, Father Hamel, was keen to establish a parochial school, and in 1892, he invited the Ursuline Sisters of Trois-Rivières, who already operated a school in Waterville, to establish St Augustine’s School (in 1904, the Sisters of the Presentation of Mary took over teaching duties at the school). 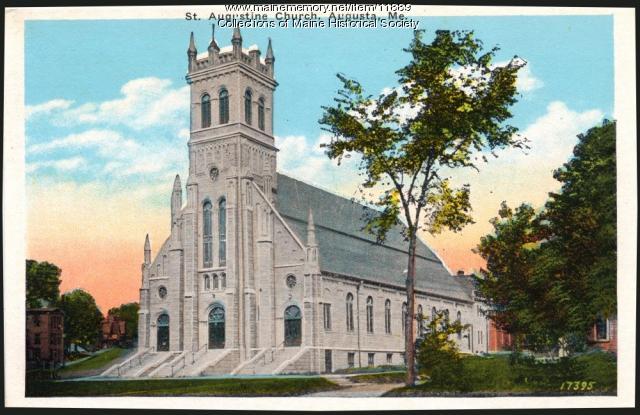 With the establishment of a parish school, it appears that both the Laurel Hill and Kendall Street Schools declined in importance. Neither the Laurel Hill nor Kendal Street Schools are mentioned in city reports after 1892, and it’s likely that most of the Franco-American children transferred to the new parochial school, where they were taught in their own language, and where their parents could be sure that their spiritual needs were cared for. A final mention of the Laurel Hill schoolhouse is a fire which broke out in the afternoon of June 16, 1892. The cause was “boys at play in basement and lighting, pipes and cigars and throwing matches among shavings.”

As for the two principals of the schools – Misses Marie-Anne Cyr and Eugenie Martel – both had left Augusta around the same time.  By 1894, Martel had “left for Waterville,” according to that year’s city directory, and although Cyr is still listed as a teacher in the Laurel Hill School in the directory of 1896, by 1897, the pair had gone into business together, establishing “Martel and Cyr millinery and fancy goods” at 77 Water Street, Waterville.  Soon after, Eugenie Martel married “Frank” Langlois, and although she is listed as co-proprietor of “Martel and Cyr” in 1901, by 1903, the business had become simply “Marion Cyr, Millinery and Fancy Goods.” By 1910, Marie-Anne had returned to Fort Kent, where she is listed in the census as living with her unmarried sisters “Mattie” and Victoire, and still operating a millinery store. 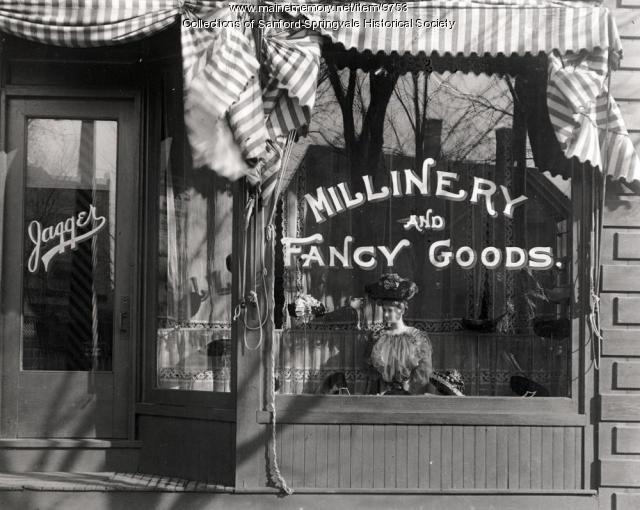 The city of Augusta’s unusual foray into educating its Franco-American population in separate schools had mixed results. On the one hand, these public schools appear to have been well-attended and produced some tangible educational results. On the other, the establishment of a parochial school ultimately appears to have been the preference of the community.  St Augustine’s was the first parish school in the city, but it was joined by St. Mary’s in 1913. In 2007, the two schools, one “French,” and one “Irish,” were merged to form St. Michael’s, which still operates today.

US Census returns, via Ancestry.com