There’s nothing quite like the taste of grandma’s cooking. This holiday season, tens of thousands of Mainers will be enjoying mémère’s tourtière, cretons, or perhaps even pets de soeurs. For immigrants of all backgrounds, food is an important link to home and family, as well as a way of maintaining traditions or future generations. That’s why so many immigrant communities bring their foodways with them to the United States – from bagels and hamburgers to sushi and pizza. For many Franco-Americans, the taste of home was bread.

Bread is mentioned early and often in the history of New France. For the French and Canadiens, bread was a staple and more. Today it remains a point of pride for the French and a core of their culinary tradition.  In 1636, Father Paul LeJeune wrote that a settler in New France received two loaves of bread, about six of seven pounds’ worth, every week in rations. One of the Jesuits’ criticisms of the native Amerindians was that their bread, made from corn, and unleavened by yeast, was inferior. One missionary described it as “a mass of Indian corn meal soaked in water without leaven, which is not worth the bread which in France they make for the dogs; whatever name one give it”

Sometimes bread carried a larger significance, since it was at the center of the Eucharist, the culmination of the Christian mass. Catholics believe that the bread used in the ceremony is transformed into the body of Christ. While today mass-produced communion wafers are commonly used for the Eucharist, loaves of unleavened bread were traditionally provided by congregants for use in the ceremony. Supplying bread to the church was both an honor and an obligation. In 1646, the Jesuits recorded how one parishioner was perhaps over-enthusiastic in her delivery of the bread:

Madame Marsolet, having to prepare bread for consecration, desired to present it with the greatest possible display; she had it furnished with a bouquet, — a crown of gauze or linen puffs around it. She wished to add candles, and quarter-écus at the Tapers, instead of the gold écus which she would indeed have desired to place thereon; but seeing that we were not willing to allow her this, she nevertheless had it carried with the bouquet and the Crown of puffs. However, before consecrating it, I had all that removed, and blessed it with the same simplicity that I had observed with the preceding portions, especially with that of Monsieur the Governor, fearing lest this change might occasion Jealousy and Vanity.

By contrast, the inhabitants of the village of Cap Rouge were “summoned before the governor” in 1658 for shirking their duty to supply the church with bread for communion.

Of course, most Canadien farmers made their own bread, often in specially-constructed outdoor ovens. But when they came to the mill towns of the United States, families would no longer have been able to bake for themselves. Most families lived in small apartments, with barely a stove for heat, let alone the large bread ovens required for baking. So bakeries soon began to pop up in the Little Canadas of New England. In Lewiston, the Evening Journal captured a booming industry in 1883:

The extent to which the Lincoln Street bakery business has grown is astonishing, but it is very evident to the passer-by at the time when the bread come from the oven…The French Canadian population must consume over seven hundred loaves of bread per day.

The Journal goes on to describe the bread produced in these bakeries, which, according to an unnamed Franco baker quoted in the article,

It  is not French bread…In Canada they bake a real French bread, but it is Yankee bread, all this that is baked in pans, here. In Canada, we bake bread on the oven bottom in great loaves that have been rolled out quite thin, and doubled back on themselves.

It’s not clear what traditional bread is being described here, although the the Journal distinguishes it from the “long sausage-like rolls” (i.e. baguettes) found in “French cities.” The bread that was being churned out at a terrific pace in Lewiston in the 1880s resembles a style still known in Canada today as pains fesses, with a distinctive double-loaf shape.

The Lewiston City Directory for 1883 listed at least nine bakeries or grocery stores with bakeries attached. Five were Franco-American operations on Lincoln Street, in the heart of Little Canada. At the time, Francos made up just around one fifth of the city’s population of 19,000, meaning that while there was one bakery for every 3,750 Yankees, there was one for every 800 Francos,

The Lewiston-Auburn Franco baking tradition began from humble beginnings, but multiplied quickly, and gave a start to a series of well-known businesses and entrepreneurs.  The first Franco-American bakers in the twin cities were probably Zépherin Blouin and Ulric Delisle. Both arrived in Lewiston around the same time (Blouin in 1868, and Delisle before 1870). Blouin had been born in Saint-Anselme, Québec in 1841, and Delisle in Cap Santé, QC, in 1842. Delisle had been a trained as a baker in Québec – in the 1861 Census of Canada, he is listed as  compagnon boulanger (journeyman baker). When he arrived in Lewiston, he worked first for Thomas Day, a Yankee who was a partner in Varney & Day, a baking operation in downtown Lewiston, but who also operated a boarding house, saloon, and grocery store in Little Canada. Blouin opened a bakery opposite the Grand Trunk Railway station (the arrival point for most French Canadian immigrants to Lewiston) by 1874, in a building which had previously housed the first Catholic chapel in the city. 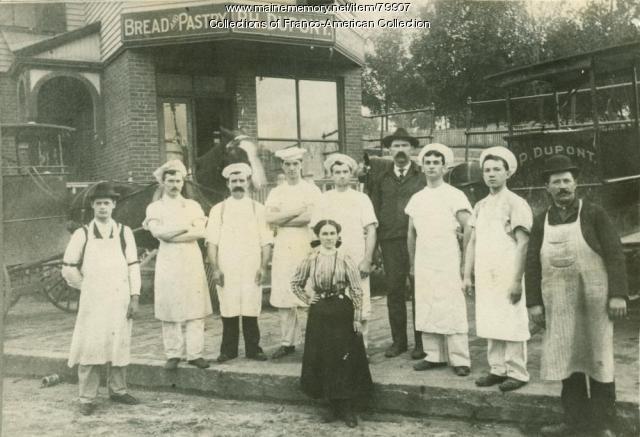 A number of prominent businessmen got their starts in the Franco baking business in the Twin Cities – Arthur Remy, Magloire Phaneuf, and Eusebe Provost among them. The most successful is undoubtedly François-Xavier Régis LePage, founder of LePage Bakeries. Born on the Ile d’Orléans, at the mouth of the St Lawrence River in 1873,  he came to Lewiston in 1889, and worked in the city’s textile mills for just a year and a half, before he got a job as a baker, perhaps at the Philippe Dupont bakery in New Auburn, where he was employed by 1900. At the Dupont Bakery, LePage not only learned the trade, but also met Eugene William (“Willie”) Mailhot. Mailhot and LePage went on to open their own bakery together, but the partnership was short lived.

According to Willie Mailhot’s grandson Roger, LePage and Mailhot were good friends – but perhaps too close:

LePage bought Mailhot out of the bakery partnership, a business that went on to become one of Lewiston and the state’s most well-known names. Mailhot went on to found the sausage and meat business which bears his name. 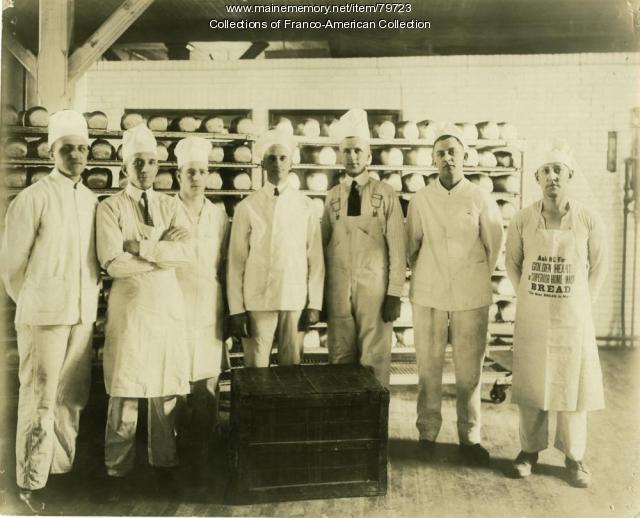 Today, there’s no longer the proliferation of Franco-American bakeries in Lewiston or any other Maine town that the Journal described in 1883. But there are business, big and small, which are part of this long tradition.